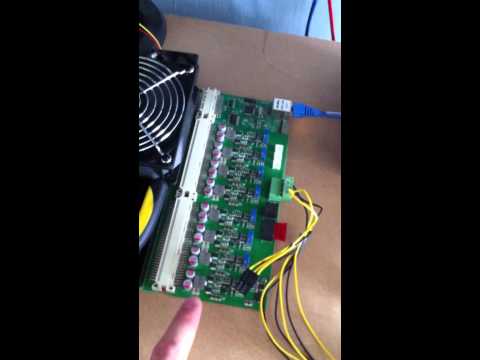 Want to invest in bitcoin but willing to accept more risk for more return? Maybe investing would be right for you!

As we all know, companies such as AsicMiner are currently kicking butt with their asics by releasing the eruptor blades and Erupter USB sticks for mining. This combined with their 28% or so of total hashing power for the entire bitcoin network is resulting in fantastic growth over the past few months, and their dividends are doing quite well.
If you are interested in shares of AsicMiner , check out either Direct Shares or Pass Through shares, which is just one share of AsicMiner. You can find them in auctions on bitcointalk as well as sites such as BTCT.TO
You can also get smaller shares known as micro shares. There are often times 1/100th of a full share so people can easier purchase them and provide an easier method for reinvesting dividends.
There are other shares too, such as AMC which just recieved a few Avalons they purchased a while ago. Keep in mind that the owners relations with others on the forum is quite poor and very unprofessional, so I would still consider it rather risky.
There are also companies which are not based on bitcoin but experimenting with it as a source of capital, such as KenilWorth on bitfunder, who are a mining company which finds raw material deposits and then sells them to another company (I think). The people with that company are VERY responsive on bitcointalk and seem to be very professional.
You can even if you wish bet on funds which are reliant upon BFL's shipping, such as HaveLock's Investments Mining Fund. The owner of that fund is also rather response on bitcointalk and is a very down to earth person from what I have seen. For example, they just purchased a single Jupiter rig from KnCMiner in an effort to diversify so if BFL fails they will not be destroyed.
They are also other funds out there which are designed to represent an amount of Mhash/s per each share, for example RedStarMining which aims to have 180 Ghash/s eventually, with each share containing 2.818 Mhash/s.
Also, a very cool thing about these funds is that they are very present on bitcointalk in the securities section, so you can see up to date discussion about each fund. For example, for red star mining, here is their thread: https://bitcointalk.org/index.php?topic=63257.0
You can even get a fund in an exchange, such as Crypto-Trade! Though, they seem to be having some major issues with their site for a while now, which is unfortuntate.
And you can get shares in the gambling site satoshidice!
There are tons of such securities available for lots of different styles people could choose, and because of bitcoin buying these shares is a very painless process. But do keep in mind that this is riskier than just holding bitcoin, and there are a good bit of scams prevalent in such securities, but if you keep an eye out and read their associated threads on bitcointalk you will be for the most part safe. Also, investing in companies like AsicMiner increases the network hash rate, making it even harder for a single entity to barge in and get more than 50% of the network hash rate, resulting in an even more secure network! These sometimes even hare shares which cost less than five dollars, so to get started you don't need much BTC at all.
And here is the link to bitcointalk for anyone who wants to do more research and look at any other funds which might be of interest. Don't forget that there are some funds which are not exchanged on these sites, for example group buys where each buyer holds a certain percentage of proceeds from a very expensive miner they pool together to buy. As earlier though, be careful.
There is also a really good subreddit for discussing these securities as well as others on /BitcoinStocks !
Edit: Added in bitcointalk threads for each security I listed.
Edit: It seems that there are nearly half as many downvotes as there are upvotes. Can anyone clarify?

ASICMiner is auctioning off 10 of their erupter blades over on bitcointalk.org
I have been GPU mining for a bit and my returns are tickling down over time and I was not quick enough to hop on the ASIC train when it came into town. I believe in bitcoin as much as everyone else and want to keep hashing away, but affordability is becoming a concern.
At the current auction of 60BTC for one blade it equates to about $5280USD for the 10Ghash of hashing power. I don't have that kind of cash to put into the auction and I know fellow GPU miners are probably in the same boat. What I propose is that we all take even stakes and subsidize the cost of the Blade and I will cover the cost of electricity and running it 24/7/365. Profits from the Blade will be proportional to how much you put into the Blade and its overall cost in BTC since the USD value fluctuates and the auction is in BTC. Payouts would of course be in BTC and would be weekly or monthly.

How I fall in love with bitcoins these days

2013,9th, Sep BITCOIN ASICMINER, this new word then accompanied me for the last days till today. Since 2012, I have learned something about bitcoins from my friend. I know that [Bitcoin is a kind of network virtual currency, anyone in the world can use to purchase virtual items, such as clothes, hats, equipment in network game,etc. Certainly, you can also use bitcoins to purchase items in real life as long as the seller accept. However, the most special point for bitcoin is that the issue, circulation and management of bitcoins does not belong to any person, organization, company or any country. In another words, it’s equally and belong to everyone who participate in. Anyone who have a computer, connecting to network, and then running a free open source software can be involved. There is never such thing that anyone who as an administrator or who have the center node or privilege. That calls BITCOIN SYSTEM, a equally peer-to-peer(P2P) systems. Most important of all, BITCOIN SYSTEM can promise as below: 1. the total quantity of bitcoins is certained. 2.the quantity of bitcoins increase at a slow pace, but not sudden increase. 3. bitcoins will eventually increase to a certain quantity, but not unlimited growth. 4. the above characteristics are guaranteed by a recognized mathematical formula, do not need any guarantee come from any person, any organization or country. 5.the circulation of bitcoins do not need any intermediaries and the transfer process is not subject to interference]. So this news asicminer is a big surprise for me. At the first week, I was curious about this magical hardware , but then I nearly crazy about it. 2013,9th, Sep 13:46
2013,10th,Sep 10:05
2013,11th,Sep 15:16
2013,12th,Sep